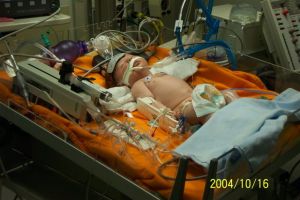 Austin is a miracle child. He had a 1% chance to live and he survived. He has overcome many obstacles and now is one of the happiest boys I know.

My son Austin was born on September 7, 2004. He was born at home in a water tub. He is our third child and only son. Our daughters Abby and Amber were so excited to have a baby brother and my husband and I felt that our family was now complete. We had two beautiful daughters and a son.

Then the fateful day of October 15, 2004, Austin ended up in the ER and was rushed to have brain surgery. He was just 5 weeks old. He had a massive bleed on his brain. It was determined that Austin’s bleed was caused by Hemorrhagic Disease of the Newborn or a Vitamin K Deficiency Bleed. He was not given a simple Vitamin K shot. That simple shot would have prevented all this. We were not against shots, we just were not given the correct and total information about this shot. We would have given it to him. It’s a vitamin!

I had brought Austin in to doctors with classic symptoms and no one caught it. Austin sustained massive brain injury to more than 50% of his brain. His whole brain was pushed past the mid-line causing global damage. The amazing thing is Austin was only in the hospital for exactly 2 weeks. He was able to get off the vent after 1 week and was able to resume nursing. He is a little fighter and my hero.

His left bone flap of his skull was put into the hospital freezer and 6 weeks later was put back into his head. That was his 2nd surgery, he has now had numerous surgeries but remains very healthy except of course his brain.

Brain injury causes many problems within the body. Austin’s diagnosis now include – cerebral palsy, microchephly (small head), Lennox-Gastaut Syndrome (seizure disorder), severe developmental delay, and he needs help with all activities of daily living. He is a total care kid and full of love.

We have worked very hard to help Austin be the best he can be. We have done numerous therapies and keep searching and trying to help him. I have learned so much about nutrition and the brain and one of my biggest theories is that by giving Austin healthy whole organic foods and superfoods will help what is left of his brain to work optimally. And it also helps keep his body healthy. He seems to be sick less than other kids I know. Knock on Wood!!!